Warning…this is a long entry. We visited so many places and all were worthy of pictures and a comment.

Lisboa had been a populated harbor since the Phonecians. The Romans, however made a huge impact creating a series of roads leading all over the country. Today the sprawling capital has metros, trams and buses…we walked.  Barrio Baixo, Alto, and Alfama are three of the neighborhoods we spent a lot of time in. The Baxio is the western-most with a big grid redesign after the 1755 earthquake which leveled the lower half of Lisbon. Alfama has loads of pedestrian areas filled with cafes, and the Alto, as you can imagine, offers many great views of the city, harbor and the Tagus River.

When in Lisbon, you begin the day with the famous custard tart, (pastel de nata) and a cup of coffee. Yum. Everyday should begin this way. 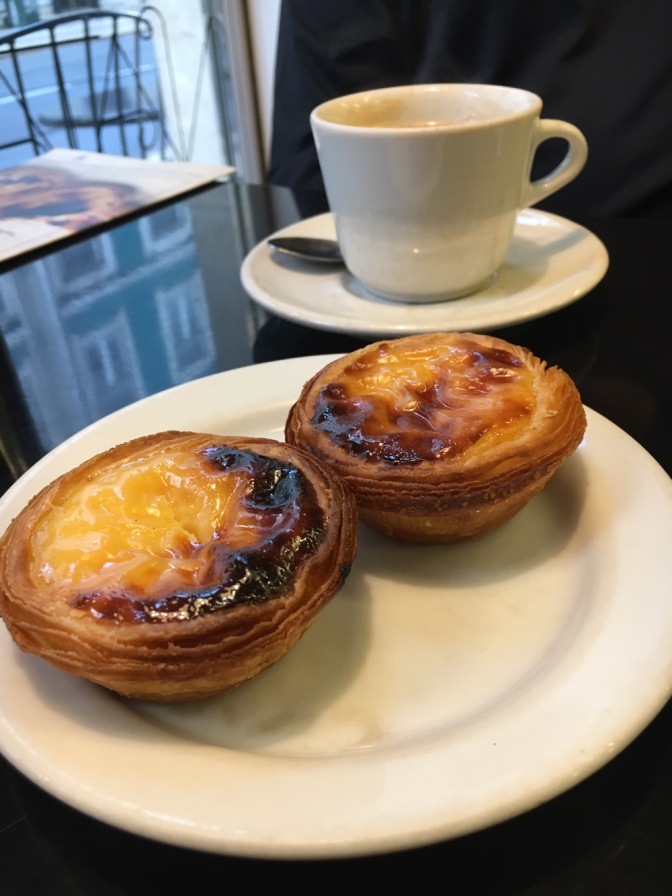 We visited the oldest synagogue in Lisbon and were given a tour by an expatriate from, of all places, Coney Island. Synagogue Shaaré Tikvah (Gates of Hope) has a pomegranate tree at it’s entrance which was very fitting because we visited on the first night of Rosh Hashanah. When this structure was built in 1901, only churches could have doors open to the streets. That is why the building is set back from the main road.

Translates to: ‘know who you are standing before’.

We also visited the Se Cathedral. This is where the Camino begins. The first yellow arrow is spray painted on the bottom right stone of the cathedral. We received our first stamps (carimbos) in our pilgrim credentials here.

We continued heading up the hills past the Castle Sao Jorge to the highest Miradouro, meaning ‘viewpoint’, of Señhora do Monte, with a sweeping view of the city below. A great place for a sunset, we were a few hours too early. 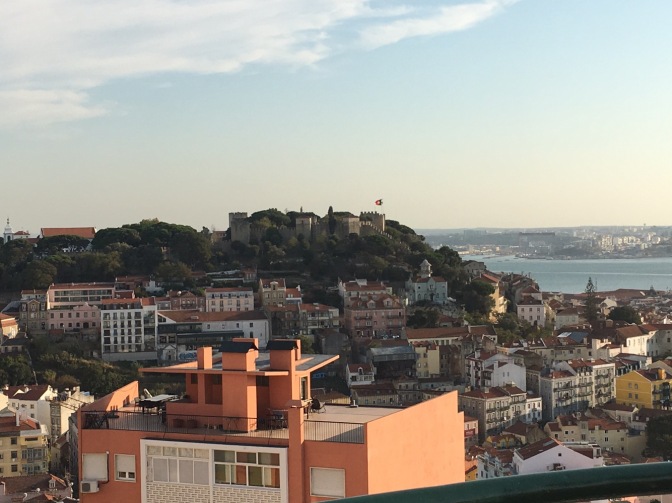 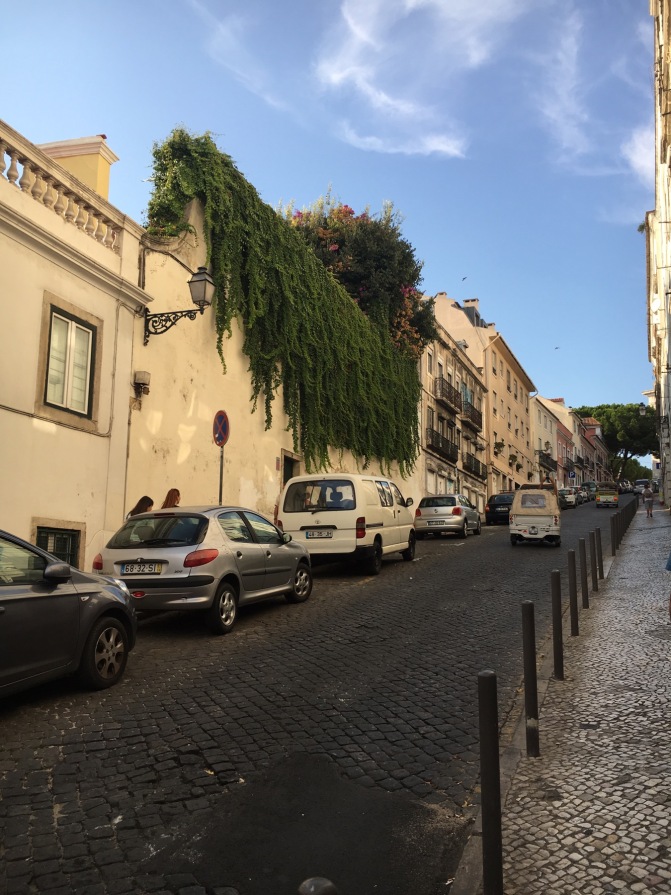 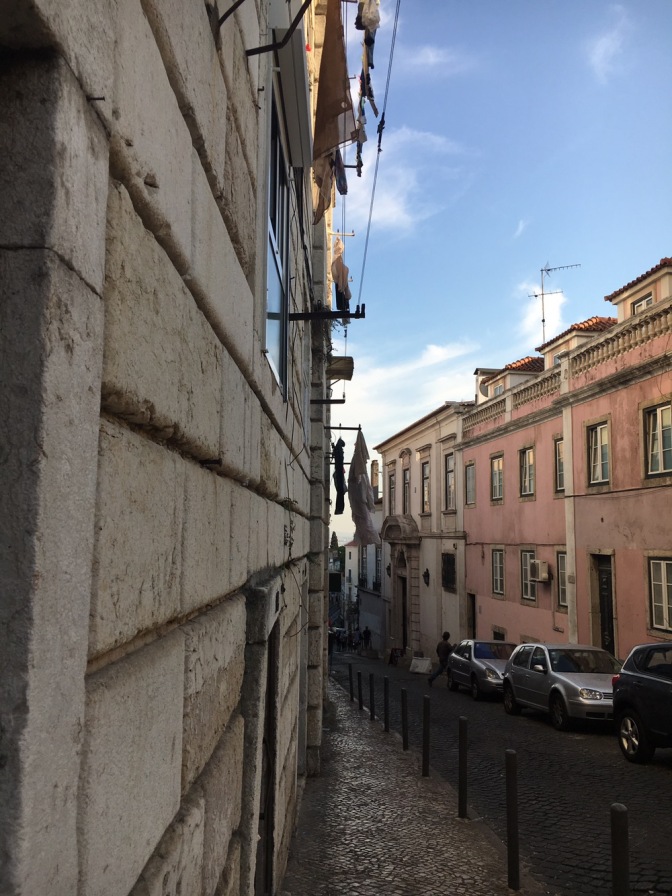 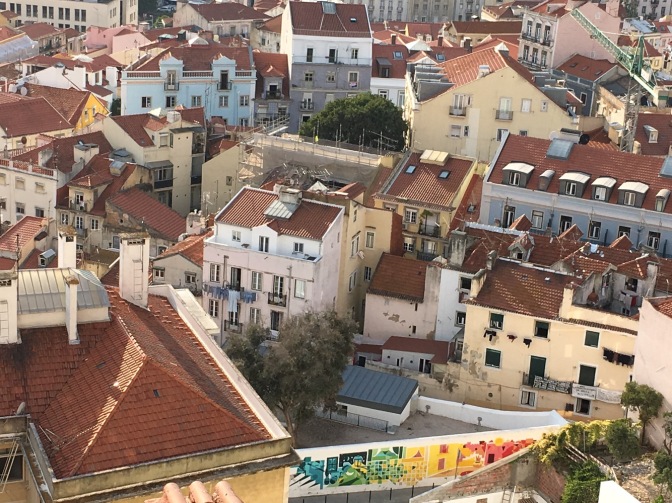 We walked past many a tram along the way. The trams have been a part of Lisbon transportation since 1873. Some of the yellow cars were gifted as reparations from Germany after WWI. 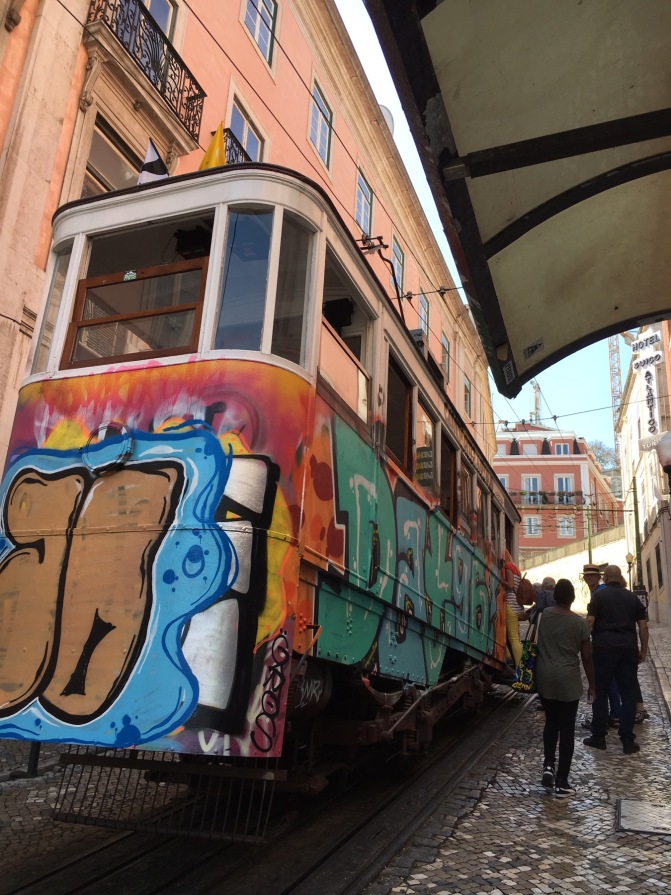 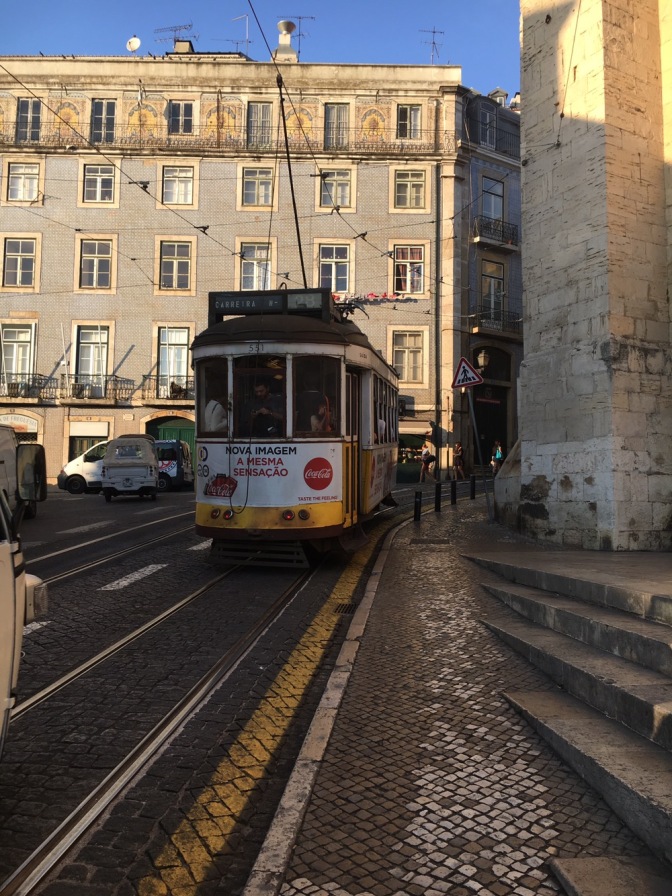 The stone streets and sidewalks are beautiful yet treacherous. Slippery and sharp. Glad we were not caught in the rain or in the wrong shoes. 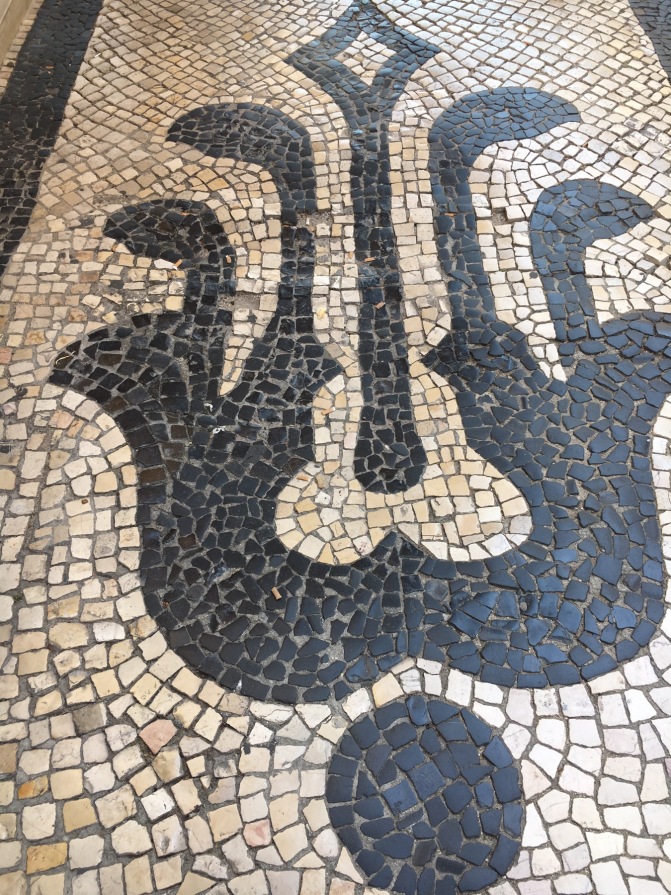 Because we went to multiple miradouras, we opted to take a photo from the bottom of the Elevador de Santa Justa. It was originally used for public service to shorten the walk from Baxia up to Carmo. Now it is a tourist attraction. 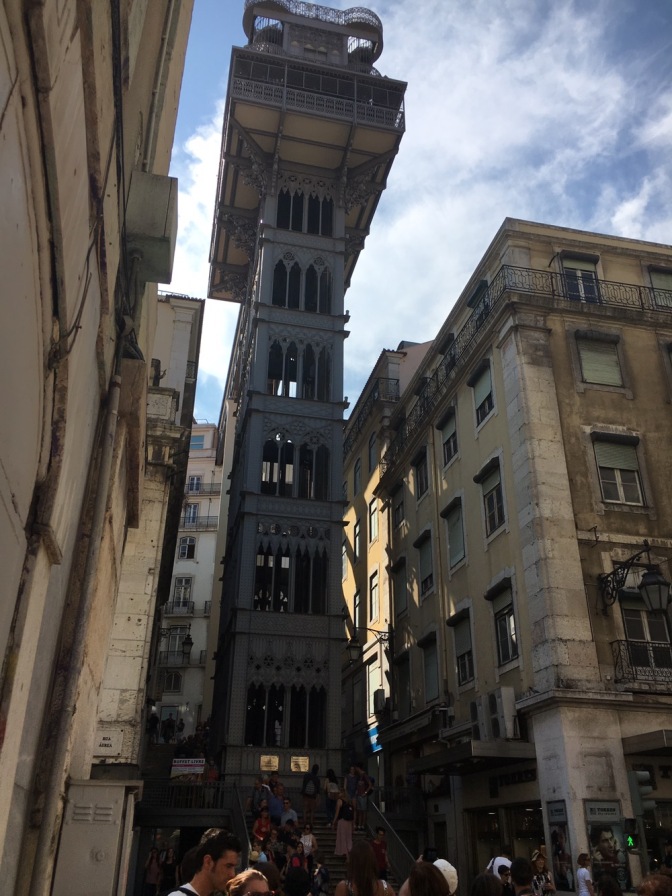 We walked around and up past the elevator to the  Carmo Convent. The 1755 earthquake demolished the roof of this church leaving the frame to open sky. The back buildings house relics dating back to 3500 BC. 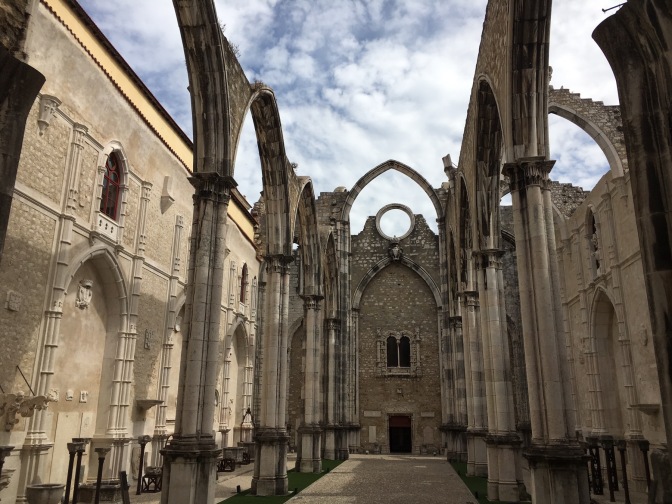 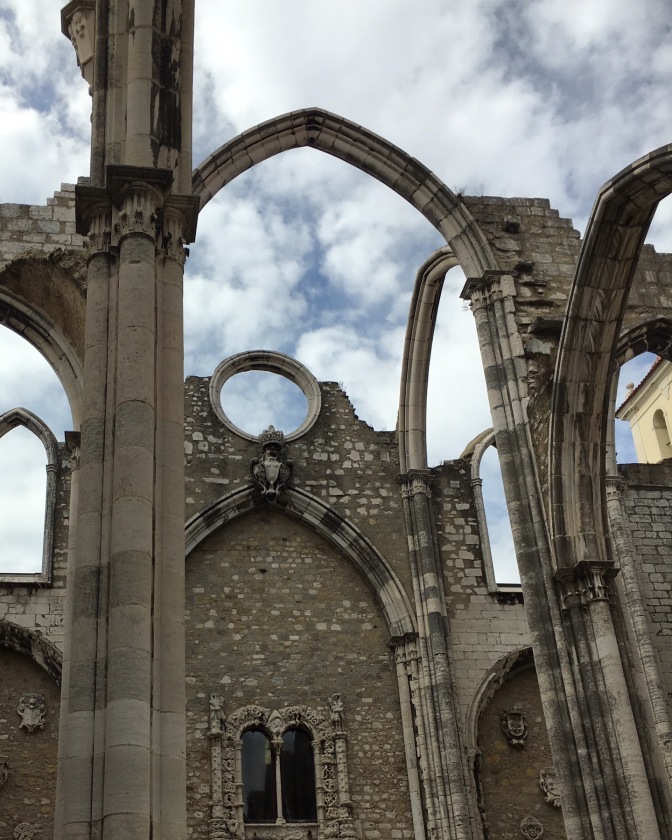 Tiles are a huge part of Lisbon. Entire buildings are covered with them. We visited the The National Azulejo Museum, a museum dedicated to the azulejo (tile).  The displays included a panorama of Lisbon dating back to the 1750s and as current as 2016. There were several workers restoring tiles and boxes upon boxes of tile murals to be restored. 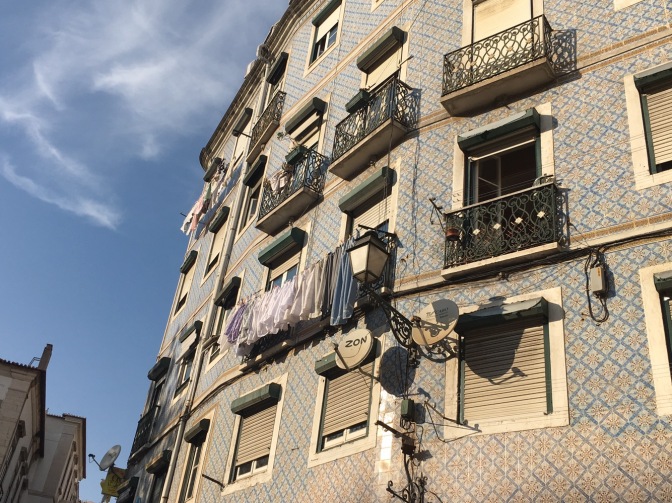 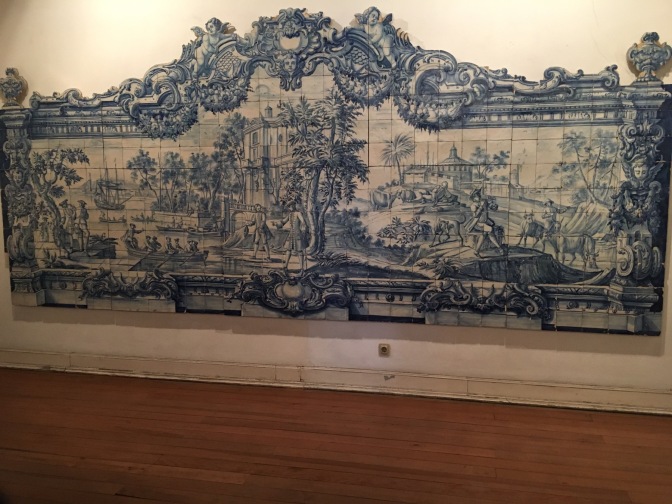 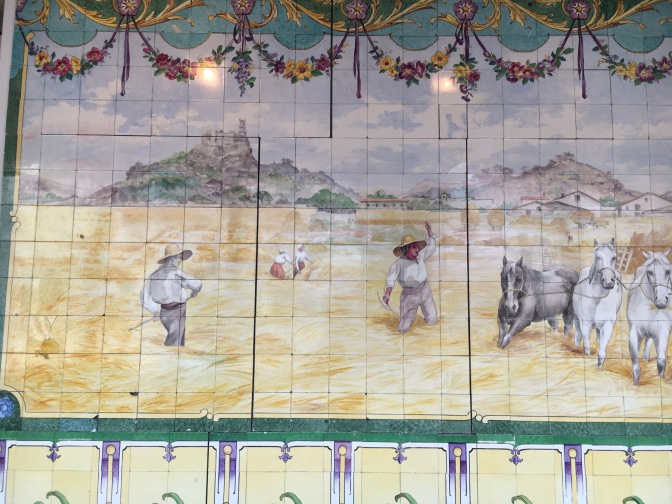 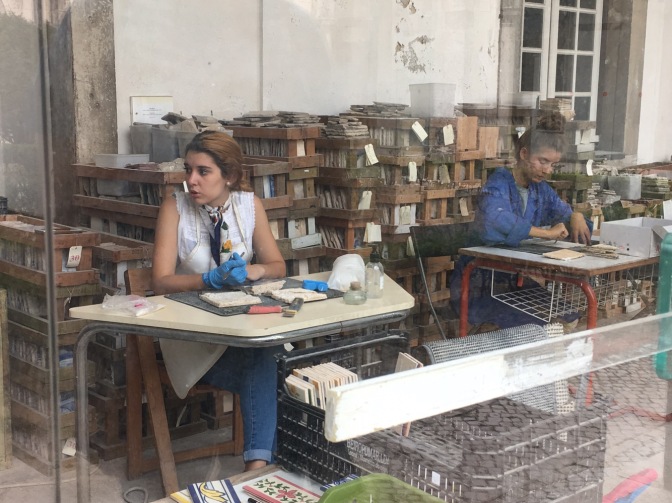 One of our walks by the river brought us to a special craft fair. It was all housed in shipping containers. We chatted with several of the artists and enjoyed the unique setting. 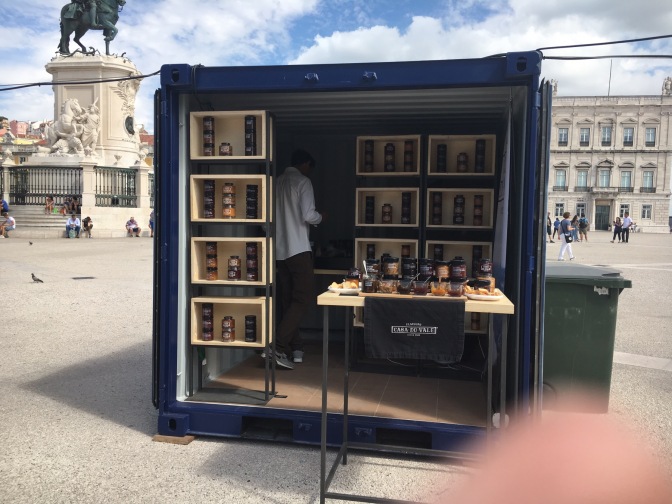 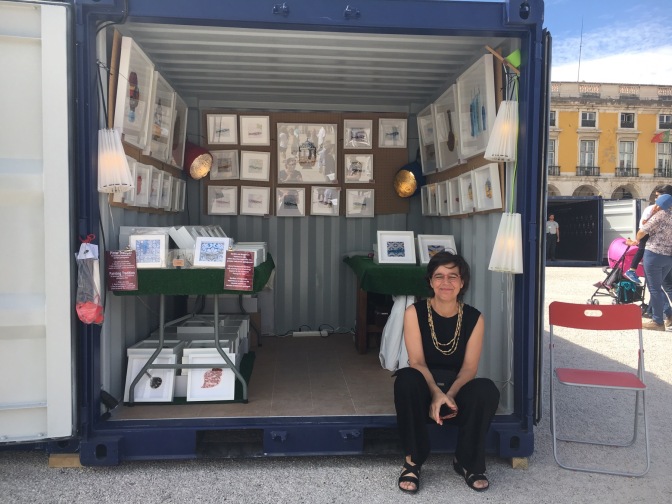 Oh, and let’s not forget about the food. Although those pastel de nata were filling, walking the hills of Lisbon gave us an appetite. We snacked on tuna (fresh) sandwiches with a delicious sauce (untranslatable); we wandered through the TimeOut Market and settled on an octopus salad and some mussels. And a glass of wine and sangria by the river. Cheese, olives and sardines too. I will try to remember to photograph the food before it is all gone. 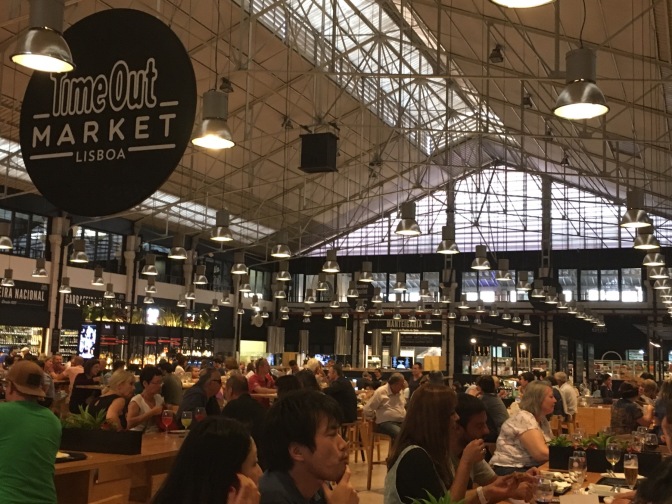