My sense of direction is notoriously opposite what it should be. Needless to say we turned south instead of north. Adding to our already extensive list of interesting and historical Florida locations, we spent some time in St. Augustine and the surrounding beaches on Anastasia Island.

Ponce de Leon, the famous Spanish explorer, is credited with the first recorded landing and exploration of the Florida coast. He was searching for the Fountain of Youth, the water source that would bring eternal youth. There is a tourist attraction in town where you can drink the water from this spring fed fountain. Judging by the appearance of the visitors entering and leaving, along with the sulphur smell, I believe it is only a fable. It is next to Ripley’s Believe it or Not; I say “Not”.

Ponce de Leon named the peninsula “La Florida” because his discovery came during the time of the Easter feast, or Pascua Florida. Funnily, we arrived the day before Easter, maybe my sense of direction is not so bad.

The  Spanish colonizations of St.  Augustine began in 1565, making it the oldest city in the U.S. St. Augustine was also ruled for a short time by both the French and the British. Finally, in 1819 the territory passed into U.S. control under the terms of the Florida Purchase Treaty.

Today, there are still examples of buildings dating back to the 16th and 17th centuries in the historic district. These include the Castillo de San Marcos, the oldest wooden schoolhouse, and the González-Alvarez House. Just as impressive are the Flagler buildings from the late 19th and early 20th centuries.

Flagler was John D. Rockerfeller’s partner at Standard Oil. After his honeymoon visit to St. Augustine with his second wife, Flagler was inspired to change the sleepy town to a winter playground for the rich. Using some of his Standard Oil fortune, he built The Ponce de Leon Hotel and a sister hotel across the street, Hotel Alcazar. These were seasonal hotels, hotel guests were committed to a three-month vacation, which cost $10,000 to be paid in cash upon arrival. There was no discount app available. He also purchased the Casa Monica Hotel. All are in a Spanish style and have unique and fascinating details. The dining room at the Ponce de Leon, now Flagler College’s dining hall contains the largest private collection of Tiffany stained glass windows in the world. The once largest indoor swimming pool, is now the Cafe Alcazar restaurant in the Lightner Museum.

These former hotels now house Flagler College, the City Hall complex and Lightner Museum. Casa Monica is still a grand hotel and I know for sure you can get a nightly rate at a discount! 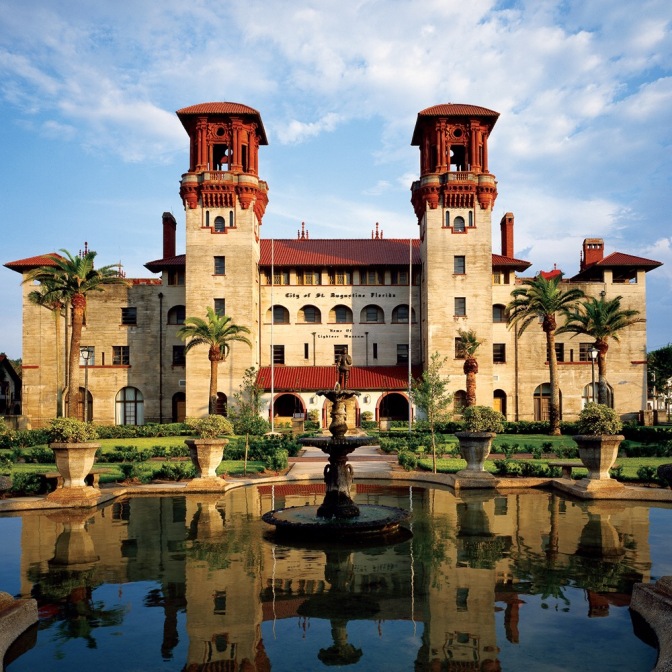 Flagler also developed a railroad which ran to Key West, established a hospital,and created neighborhoods for his employees.

The Bridge of Lions is a double leaf draw bridge which connects Anastasia Island with downtown St. Augustine. The lions which give the bridge its name were created and designed by the Italian sculptor Romanelli. The lions are named Firm and Faithful. The lions were based on a pair of centuries-old statues that stood outside Florence’s Uffizi Gallery, not after Patience and Fortitude who are the lions watching over the New York Public Library on Fifth Avenue.

Anastasia Island has a casual beach feel with lots of bikes, surfers and restaurants with views. It has been popular with tourists sine the 1880’s. We had a great time there. We experienced a new-to-us clever and important addition to street crossing. There are containers with bright flags on either side of the street. A warning wave as you cross gives everyone pause!

Before heading out of the state, we had a brief and fun visit with more family and then, because we were close, a quick stop at Disney World. Turns out we have to wait a few more years for Star Wars land! 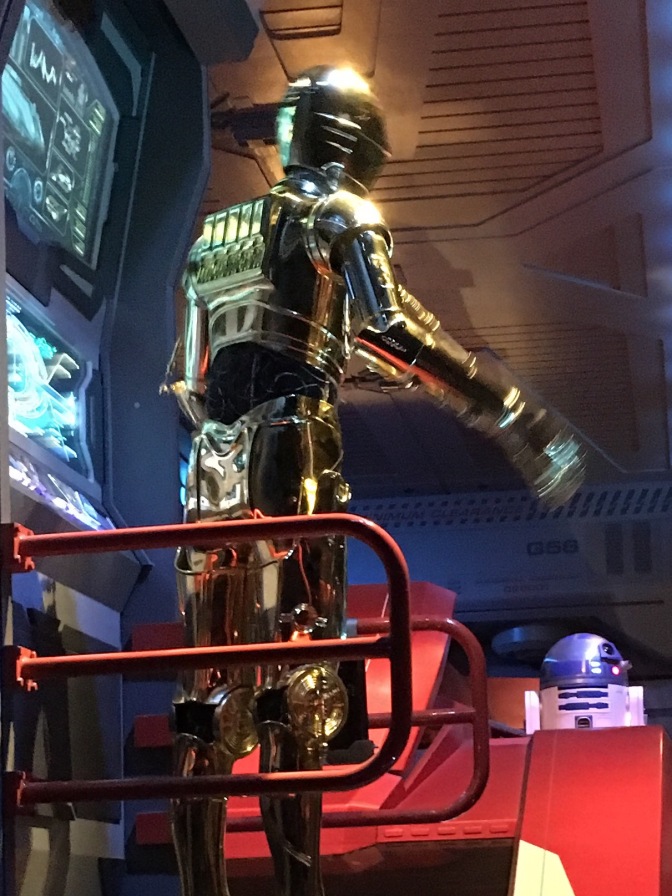 We really enjoyed our Florida visit, AGAIN. I am sure there will be many more fun filled visits.

One thought on “Florida, again!”